Berlin has been a laboratory for housing and urban design since the 19th Century from the prototypical “Mietskaserne” in the building block layout by James Hobrecht, that still is the prevailing housing type, to famous modern housing developments of the 1920s by Bruno Taut and others, large housing estates after WW II in both, east and west Berlin, and finally the widespread urban renewal of the run down inner city “Mietskaserne” that started with the International Building Exhibition (IBA) 1987, and more recently to experimental forms of housing that have emerged after the Millennium in the form of the ‘Baugruppen’ or Building Group projects. 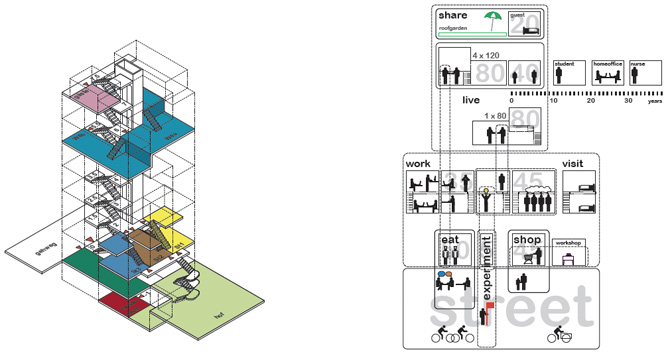 The students will visit and study a number of exemplar housing projects and their surrounding contexts to understand how urban life manifests itself in the interrelationship between these two scales - House as City /City as House. They will study these projects from the detail of individual living spaces to the scale of its integration into the surrounding urban context. The studio work will be supplemented with visits and walking tours, talks, and films, which explore Berlin’s rich urban context.

Projects to be examined include:

The students remaining in Befast will undertake the same tasks and investigation for a number of inner city blocks in Belfast. This will allow an insightful comparison of the urban structure of these two cities and their relative potentials and deficits to sustain urban life.

The studio work will involve exploring and mapping the interrelationships between urban form & density, public spaces and facilities, infrastructure & services, amenity & green space, historical and cultural layering, and particularly the patterns of life that weave these into our urban experience on both the level of the dwelling and surrounding urban context.