The work of SAUL Thesis Year began by picking up where SAUL Intelligence Unit stopped at this Summer’s Think Tank on Shannon Airport.

This study trip based at ANCB is an intensive production week focussing on the future potential of Tempelhof. It is intended to offer a valuable opportunity to students to further reinforce their thesis work to date on a large scale.

Berlin Tempelhof Airport is a former airport site in Berlin, Germany, situated in the south-central borough of Tempelhof-Schöneberg. Tempelhof Airport closed all operations on 30 October 2008 and its future now requires consideration.

There is no building programme proposed for Tempelhof. This is up to each student in the context of testing/ reinforcing/ challenging their individual thesis intent. Students are asked to propose through personal observation, exploration and making. Students will be asked to work individually.

The study will be punctuated by pin-up reviews as well as study trips to sites and buildings of note. 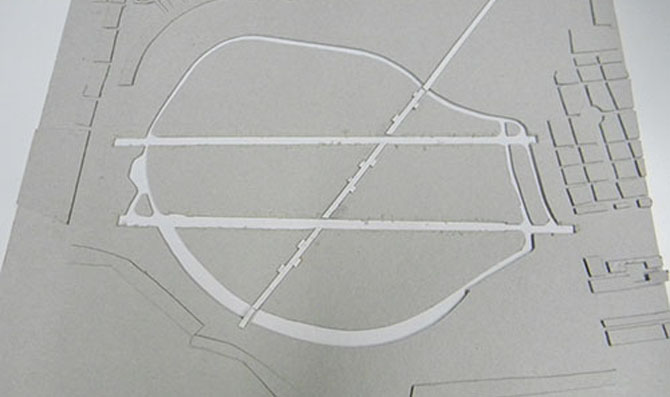 The Tempelhof site was a very active site. It consisted of people doing what they want where they wanted. People congregated to the place on the site that suited the activity that they wanted to do most. This sense of freedom and the fact that people can create their own space was the first thing and the most impressive thing that I noticed about the site. I did not want to change this about the site but instead enhance it. I noticed that the activities were mainly made up of people doing individual sports, I wanted to create spaces for team sports or group activities. To do this I created a new surface like the existing runway surfaces but created various size surfaces along each side of it. These spaces could be used in the same way that the rest of the site is used, by letting people inhabit it as they see fit. 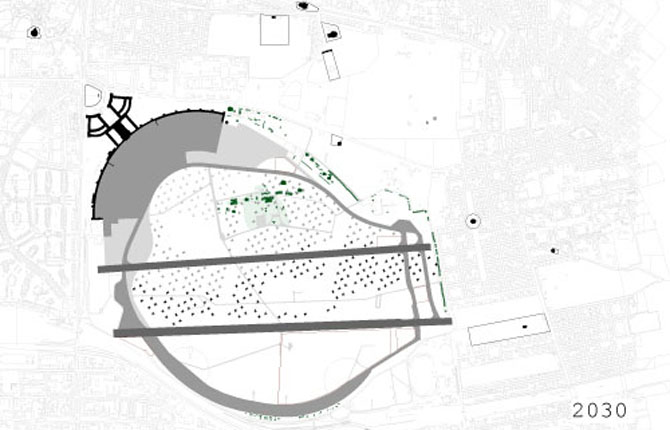 The site is very historical, and as I sat looking at the ruined fire services airplane, it evoked a strong sense of this history for me. My final year thesis is looking at architecture at historical moments of change, how it uses both its own history and outside discourses as generators. I would like to collect junked airplanes on the site as a material dump from which new things can be made, as structures that can be enjoyed in an adventurous way, and because they will have a historical memorial dimension to them.

The planes are organised on a grid that has 35m gaps and sometimes wider 55m lanes. It is parallel to the existing ruined fire services plane in one direction and perpendicular to the busiest park entrance in the other direction. It is not necessary that all the nodes on the grid are used for planes. Areas are cut out of the grid to allow for the habitat preservation and kite flying activities that are characteristic of the park. The planes will sit straight on to the grass and will hopefully be made less solid by the reuse of their material. They will be flown to the site or trucked in at night, after the park is closed. The existing wide span structure and apron can be used to process them. 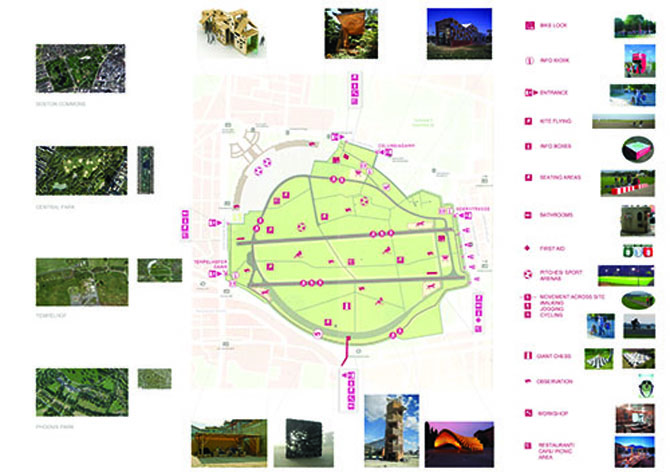 I centred the project on the idea of social inclusion and enhancement of the park. I began with the idea of creating nodes of interest in the area and this was to create some structure in which people could enhance the use of the park in underused areas. This was part of the idea of inclusion which by creating these new uses new users would be attracted to the area. Throughout the week I moved from the attractors being many small to then large objects of my design to creating a bottom up structure by providing workshops for the parks users to enhance the park with structures as they saw fit.  It was this final bottom up idea that I chose for the project as it reflected somewhat the ideals of Berlin’s Baugrupa’s. The idea of social inclusion would be strengthened by placing a new connection across to an area cut off from the park currently and placing attractors to the other residential areas around the park. The overall idea behind the project was to improve the park and to create a genuinely social space for all people of Berlin to enjoy as they saw fit. 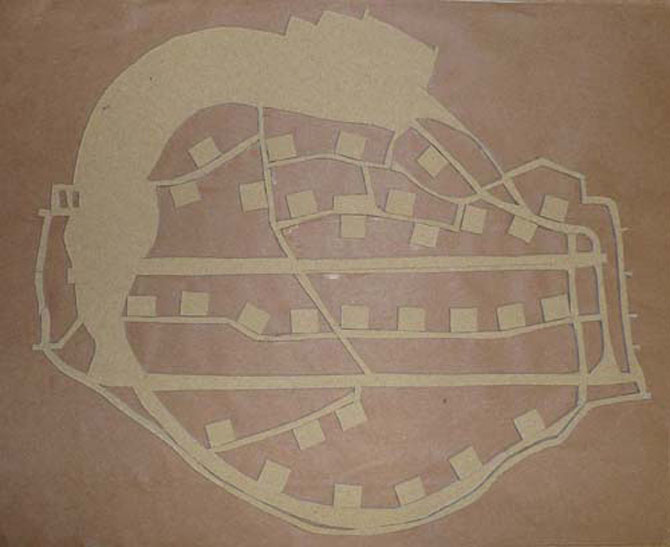 The task was to make a proposal for the future of Tempelhof, by testing our thesis idea on site.  We first made a visit to the site, drawing and taking photos.  We then worked on the site at various scales from 1:10,000 to1:500 to produce models and drawings of our proposals.

My thesis idea is about people’s experience of moving through space.  My original idea was to add a community to the site.  The context surrounding the site is very diverse.  There are some very structured parts and some much looser.  I introduced a structure around the edge, amplifying experience by juxtaposing the proposal with the context people had just passed through.  The structure matched the scale of the existing building while near it, and gradually reduced in scale as it moved away.  An inner layer of cultivation contrasted with this, being high where the building was low (trees) and low (allotment gardens) where the building was high.  In one part people would move through the rigidity of city blocks, five and six storeys high, under a steel structure, three storeys high and mainly unbuilt.  They would then move through trees where wider spaces led them towards the runway, where most activity occurred.

Having spoken of spectacle in my thesis proposal, I looked at the unusual and interesting of Berlin and at Tempelhof I was struck at the vastness of open land so close to the city centre. It felt similar to being at the seaside. But what is the connection between people and leisure by the sea? When talking to locals on the site they said Tempelhof was a place to come and get away from the city. Like the sea, it is a place where one can turn their back on chaos and look out onto a world of vast emptiness with only the horizon in view. If what was happening at Tempelhof was similar to the sea in a city with no coastline, why change it? Instead I studied it’s perimeter/edge condition and proposed enhancing the entrance spaces to this mass of land. Though not fully realized a punctured wall proposal acted as both a frame and reactivator of entrance spaces with rental shops, toilets and shelters contained within the wall which drew people in from train stations, residential areas, parks and public buildings onto the site. A wall need not be a barrier but in fact have quite the opposite effect. 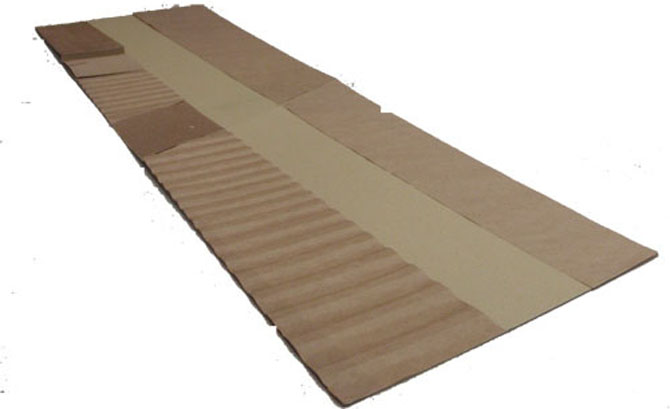 In Berlin, the site, Tempelhof, a disused airport, was a piece of constructed ground. The only natural elements in existence were the wildlife, the grass and the weather, none of which, I felt were strong enough to help to define the site.

The question I was faced with here in relation to my thesis was as to how one can   experience nature in a landscape that is almost completely constructed. The proposal, an earthen mound to offer an overview of the site and a series of berms and a planted forest, was an attempt to 'construct nature'. At the same time, the questions of whether something that is constructed could be considered nature, and at what point does nature take over, were present in my mind. 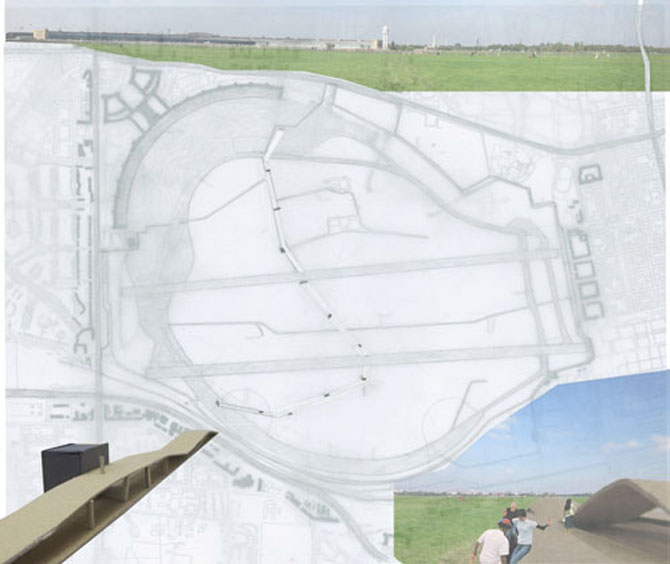 The original intent of the project was to provide small, inoffensive pavilions for the park of Tempelhof. The pavilions were to act as new vertical elements in flat the landscape, acting as reference points and providing the people in the park with basic facilities that are currently missing. The small scale pavilions would provide a human scale within a very large and vast site, adding a level of comfort which the park is currently lacking. The route connecting the pavilions would be kinked in places, and broken so that instead of being one element, it would be a series of nodes or points of collected energy and activity. Common elements would connect them all, that being form and distance, allowing them to act individually but remain part of a collective. The new concrete ground around each pavilion is to be manipulated so that the levels of nodes across the route would vary, providing walkways over and under buildings, sheltered areas and edges for seats. Dotting the points in a seemingly scattered way, would allow them to be experienced alone, or as points on a subtle route, while maintaining the existing environment of informal activity.

This site consisted of a very strong geometrical man-made form in both the building and the overall site. The building heightens the form but the scale of the site hinders your perception of the space. The centre of the space was a void due to the sheer scale of the site and appeared to be insignificant. Instead, people gathered at the perimeter. The strong circular geometry proposed helps to preserve some of the space/park by creating an impenetrable void. The existing oval shape was too big and loose as a shape to work on that level. The smaller circle was a stronger form, had a greater structure and was tighter and more resistant to external forces. The straight permanent infrastructure tangential to the circumference of the circle alters your perception of the space due to the change in level along its route by making you more aware of the geometry of the building and site. This infrastructure can develop over time as needs change. It also acts as a barrier to external forces while the minor routes gently reinforce the geometry of the circle. 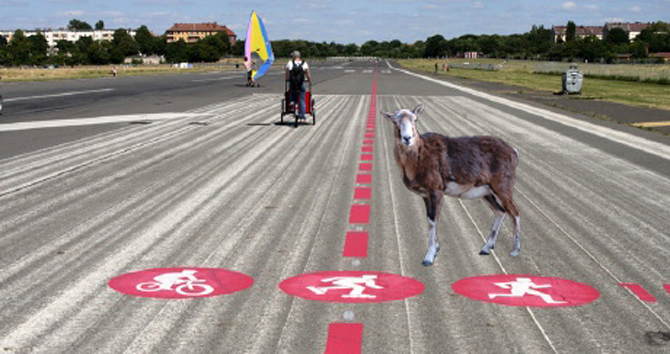 Tempelhof has a rich and growing ecology and a ground that is largely untouched by modern farming or building since 1920. The park was unrecognisable as a park and it was being occupied in ways that no other city park IÊ¼ve seen allows. The park is being made by the users rather than prescribed to them. The idea that one person should have control over it offended me, especially when the beauty of Berlin is how ordinary people get together to make small rich spaces and experiences within large grids. In Europe's most famous shrinking city, I was baffled by the need to build anew rather than to take advantage of what was already there. Do the people really need to take over an area of largely uninterrupted ecology? I proposed leaving the park as it was so as to allow the ecology of the site the develop.

In order to retain the meadowland nature of the site, a flock of Moulfon sheep would be introduced rather than using machines. The Airport building would be used to provide facilities for sports and recreational groups. The sheep housed in a small part of the building. Abundance in ecology and recreation.