The workspaces surveyed in Medellín focus on the adaptive reuse of residential buildings in the city center and reflect the working dynamics of small firms. Changing organizational structures and workplace environments has an impact at a larger scale – at the city level. Some parts of the city are now breeding grounds for young start-ups and creative firms. The offices in our survey occupy mostly challenging spaces that were not designed for work. Drawn primarily by location and inexpensive rent, they struggle to transform their interiors into practical working environments. 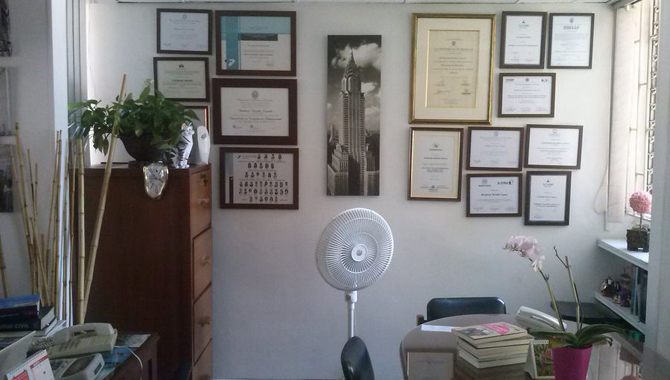 Responding to Property Demand
A property management firm is located on the first floor of a residential building of the Laureles neighborhood, which was planned in the 1950s as part of the Garden City movement.  It has been a predominantly residential area, but has recently seen a spike in the demand for office spaces. Employees claim they prefer to work in a more natural setting that is less stressful and busy. The converted worksplace is occupied by five workstations and a waiting room for customers. It receives natural light through large windows of ​​the main exterior facade. The workstations by the window receive excessive solar radiation throughout the day, which creates unpleasant contrasts for employees.Artificial fluorescent bars are distributed every 3 meters to balance contrast and shadows. Despite multiple circuits the lights cannot be adjusted manually by the staff according to their needs, which results in energetic inefficiency close to the windows.

Extended Workshifts
Located in the administrative heart of the city, a judicial office employs a number of civil servants and welcomes people from the general public. As part of a complex of twelve buildings from the early 1970s, the Justice Building is the highest one and the office occupies the third floor. Approximately 106 people work in an area of 42 m2, in three different shifts every day. Characteristic floor-to-ceiling vertical windows define the architecture of the building. They allow the entry of natural light, but it mostly blocked by workstations. When the day warms up the heat rises to uncomfortable levels and windows are opened for ventilation.The square-shaped, open floor plan has 21 working modules, most of which do not receive sufficient natural light. Artificial lighting is necessary throughout the day, with 64 fixtures evenly distributed and a lamp for every two workstations.
Thinking Underground
An archive in the basement of the university prompts both spatial and lighting challenges. Basements are generally darker and cooler than the rest of the building, but they are also convenient, easily accessible and ideal storage spaces for documents. This University Archive adapts an underground space to accommodate both storage space and students’ needs. Only six employees visit the archive on a daily level, but occasionally larger groups of up to twenty researchers arrive.In this case, there is little daylight coming from small windows at street level and it cannot be controlled at all. Most work stations are located along the wall with the windows and the archives occupy the darker area in the building’s core. The space also has a large stained glass door that allows natural light into the space.  Artificial lighting fixtures are energy efficient and organized in three separate circuits. This way they can be operated according to the need and number of people in the archive.

Behind A Curtain of Foliage
An environmental design firm is situated across the street from a park, within a building built 25 years ago. Seven architects and a secretary get to work at 7am to enjoy as much natural light as possible before they leave at 5pm. The vegetation opposite the office is over fifteen meters high and works as a natural curtain. Employees enjoy direct sunlight throughout the day, but can avoid excess glare and heat in the afternoon. Moving shadows and scattered textures of light spill into the office at all times of the day.The ratio of natural light and artificial light in this space is determined by the prominent position of windows in the façade. Even though there is limited space for visual or acoustic independence, the architects are often away on-site and the office is rarely at full capacity.Despite abundant natural light, artificial lighting is sometimes needed. The transition from one to the other is abrupt and distracting. The workspace was found to have clear light zoning, determined by both natural and artificial light that reflect visual ergonomics, safety, comfort and productivity.

In a former university building, a management company retrofitted the interior of an existing building for a team of twenty. The most prominent feature of the building is the curved architecture, which generates stark light contrasts and shadows throughout the day. Large, floor-to-ceiling windows allow for natural lighting, but the office spaces are unusual and small because of the curving floor plan. Due to intense solar loads at certain times of day, employees close the shutters and keep them so. Architectural finishes are not favourable for the distribution of natural and artificial light. The colour and texture of bricks absorbs much of the light and the wooden finish on the ceiling creates a low-light atmosphere even when all the lights are turned on.