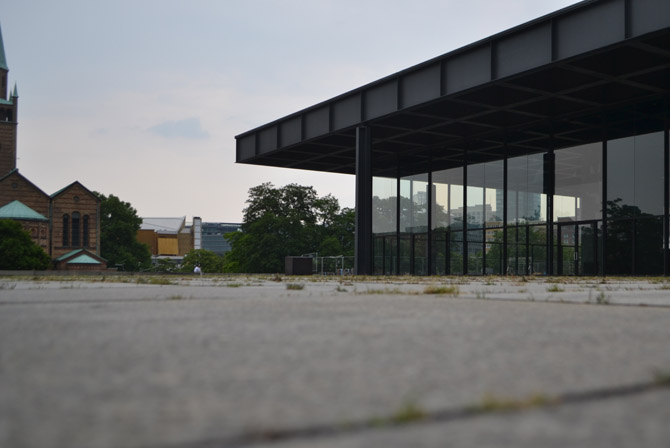 PHASE I: OBSERVATIONS made by Universities in Residence: McGill University, University of Kentucky, Royal Melbourne Institute of Technology; JuneâJuly 2015

1. CONNECTIVITY AND CIRCULATION
Visitors to the cultural buildings at the Kulturforum do not find their way easily. They often find themselves on paths leading nowhere, or hitting obstacles such as walls or unsafe zones. Circulation, both automotive and pedestrian, is certainly a major problem of the site. Wayfinding and disorientation thus emerge as main challenges to be solved. The way fronts, backs or not of the many free-standing buildings work in defining space has proven to be an important contributing factor. As described in the masterplans of Hans Scharoun, the curved Neue Potsdamer StraÃe separates the New National Library from the other buildings. The design of the library responded to a planned, but unbuilt, motorway on its other side, resulting in poor engagement with Potsdamer Platz to the east.


2. LANDSCAPE AND CITYSCAPE
Being largely based on Hans Scharounâs principles, the plan of the Kulturforum area avoids regularity and repetitiveness. Scharoun not only prepared the master plan for Kulturforum, but also envisioned the entire city as landscape, a so-called Stadtlandschaft. The buildings were seen as hills, roads as rivers, and actual greenery was supposed to penetrate the ground surface, mixed with art in sculpture gardens. The architectural solitaires were intended to shine and dominate the space, creating strong force fields. Additionally, many post-war modernists have avoided axiality and symmetry on purpose, as they were branded as totalitarian, something demonstrated in Berlin both by Nazism in the 1930s and 1940s and later by the Communist regime governing East Berlin.

The Kulturforum combines elements of pastoralism â for instance in the sculpture gardens â and more formal elements, such as the piazzetta created in the 1990s. These qualities, however, have ambiguous effects on the visitors. The physical experience give strong sensations of exposure, lack of shelter, and even discomfort, making the space feel windswept and bleak. Many gaps between human (experiential) and built (formal) environments have been observed: the two do not meet each other in a fluent way. This led to explorations concerning edges and centres, transparency and visibility.

In their projects, the students responded to this condition by experimenting with visual language (e.g. colour coding), and tried to make the one-dimensional flat ground layer more layered.

3. THE GROUND PLAIN
Stemming from the previous observations, issues of surface treatment (textures, colours) were detected, as well as the role played by transitions. For instance, the piazzetta that is supposed to connect different buildings actually creates new gaps and dikes at its edges, and its vertical transitions seem to be unsolved. The voids between the buildings dispersed throughout the Kulturforum represent both a quality and a challenge. A mismatch of surface materials, badly defined boundary lines, inconstancy in location of paths: all these contribute significantly to the already stated confusion felt in navigating the space. The challenge identified was to mend these issues by dealing with transitions, both horizontal and vertical.

4. SCALE
Kulturforum seems to lack human scale. Although the freestanding sculptural form reads as cohesive and harmonious in the master plan, the actual scale of the site is beyond what a person can grasp. Attempts at scaling are present in the immediate surroundings of the buildings, but are largely lost in the vast openness between them. The buildings are rarely seen in their entirety, and the perspectives are not framed by middle-ground elements and are constantly broken by more prominent elements on the horizon, notably the Potsdamer Platz buildings. For a person walking or standing it is thus difficult to build up connections within the area. The expanses of no-manâs lands lead to feelings of bleakness between the buildings. The challenge was to give a measure to the scale of the space, considering existing and new framing contrasts and time-space intervals.

5. PLAY
Who are the users of Kulturforum? Nowadays, it is mostly visitors to the high-end cultural buildings, and students and scholars in the library. And while the number of visitors to these buildings is on par with those to on par This said, the density as well as the diversity of the people on the site is low. The activities are happening almost uniquely indoors. That means the use is oriented inwards, leaving almost no connection with the outer space. Moreover, the rather limited programme attracts no new users. Even obvious functions such as places for lunch or evening meal are scarce, of a makeshift character or are missing altogether. The area lacks identity at first sight. Nevertheless, we witness spontaneous appropriation of the space, such as skateboarders using the surface of the piazzetta. An in-depth investigation also reveals a couple of surprisingly intimate spaces, mostly hidden from sight.

This has led to crucial questions: Does the space promote improvisation, and how? Does the protocol of the site allow it? How can it be promoted? The possible answers build around broadening the scope of uses, including recreation, entertainment and events. The aspect of occasional and permanent use was important. Finally, the challenge was to design ways that can build peopleâs association with the site, and giving the space an identity.
PHASE II: APPROACHES from the Universities in Residence: University of Sydney; Universidad Diego Portales, Santiago de Chile; University of Melbourne ; SeptemberâOctober 2015
The three Universities in Residence (University of Melbourne, UTS, and Universidad Diego Portales) participating in the second phase of the Kulturforum project began working on the project in July. Although the tasks and curriculums differed broadly, their collaboration at ANCB enabled the exchange and enrichment of perspectives through presentations of the student work, as well as discussions with external guests on the themes of inclusive public realm and urban design approaches.
The collaboration culminated in three sets of final reviews on 1st and 2nd October. The vast majority of the 30-40 student proposals fall into one of the following three approaches.
1. OVERHAULING THE PROGRAMME
Small-scale interventions that formally penetrate specific spaces and the interior of buildings, responding to the lack of diversity in land use at the Kulturforum. We could call them âprogramme hackingâ, as they bring new functions that challenge the current orientation of the area to limited user groups. Several projects provoke the high-culture profile of the area by adding âdeviantâ activities: a parkour park (1), spray walls, or even gay bar or a sex shop (2).
Other projects aimed to complement the existing functions by adding a new programme especially to the central space between the main buildings; a food market (4), a cinema museum (5), or additional spaces for childrenâs activities delivered by all surrounding cultural institutions.
Students also addressed the current Museum der Moderne brief, offering particularly interesting ways to radically rethink the archive component of museums from something usually hidden to an organising and enlivening device. (06)
2. ORDERING SPACE, INTEGRATING INTO WIDER CITY
This set of projects tackled the poor orientation aspect within the Kulturforum, together with its dislocation within the wider city with a new energy. An elevated walkway connected between the canal to the south and Tiergarten to the north (9, 10) stresses the pedestrian to rebalance the 1960s car-oriented layout. Other responses incorporated the Kulturforum into an extended park, the nearby Tiergarten (8). A different strategy, generated by analysis of visual connections within the Kulturforum, or in an attempt to create a true âforumâ, inserted multi-levels above and below ground to connect between the spaces within surrounding buildings and to address the separation cause by PotsdamerstraÃe.
3. RE-CONTEXTUALIZATING THE SOLITARES
The third core approach centred on the solitaire character of the main buildings of the Kulturforum, and the difficulties they present for a cohesive ensemble and urban landscape.  Responses ranged from the immediate context of these buildings; literally âdethroning Mies and breaking up Scharounâ (11) reworking the podium of the Neue Nationalgalerie to mediating access to other levels (12), or challenging the dominance of the âold mastersâ by inserting another solitaire between them, such as a tower (13), or a complex new pattern (14).
Part of the Collaborative Research:
Future Urbanscape: Berlin's Kulturforum