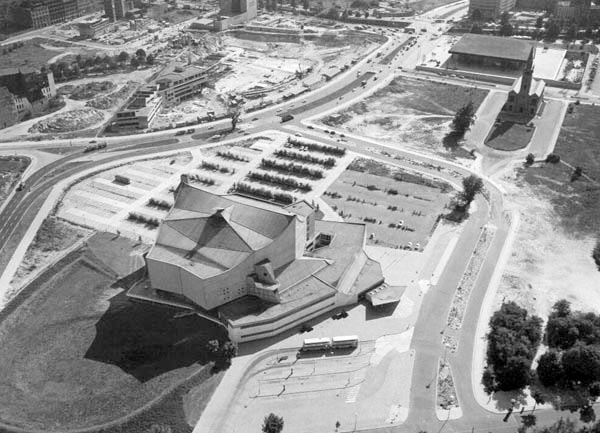 The history of the Kulturforum (culture forum) shows much of Berlinâs destruction, division, and unfinished plans, but also generosity and enlightened ideals. The area is located between two opposite poles: Tiergarten, the cityâs largest public park to the north, and Potsdamer Platz, a bustling hub to the east. It evolved from a diplomatic quarter, was then included in the Nazi rebuilding plans, was heavily bombed during the WWII, ended up at a new inner periphery of the divided city, and finally became central again after Germanyâs reunification. The year 1945 was a âpoint Zeroâ for Germany. Starting as an almost bare plain, the area has become a showcase of modernismâs disparate branches with the new Philharmonie (Philharmonic Hall; 1957-62) by Hans Scharoun and the Neue Nationalgalerie (New National Gallery; 1962-68) by Ludwig Mies van der Rohe. In the 1960s, the place resembled a rather haphazard grouping of buildings, but a new programme was born in the process: a forum of culture. The space was to be based on Hans Scharounâs idea of âcity landscapeâ. The buildings found themselves on a newly occurred periphery, when the destroyed Potsdamer Platz virtually disappeared when the wall crossed it. The golden metal cladding of the Philharmonie and Neue Staatsbibliothek (New State Library) could flash ârays of freedomâ to the separated East, and the idea of cultural forum was supposed to balance out the imposed division of the city. When Berlin was reunited in 1990, Scharoun was already long dead. At the nearby Potsdamer Platz, the answer to the lack of identity was thought to be dense urban fabric . Today, less than twenty years, densely building figureground without firstly building up associations with the place, and without integrating it into the functional flow of the surrounding city, does not seem to be the sort of solution needed. The urban balance has changed yet again. The visual and experiential identity of the Kulturforum - something carried by the urban landscape between and around the signature architectures, remains far from satisfactory.

DESIGN COMPETITION: "MUSEUM DER MODERNE"
The announcement of a competition to add a new building to the Kulturforum has stirred the debate about this dislocated area of the city once again. In November 2014 the German Federal Government decided to invest 200 million Euro in a new Museum der Moderne (Modern Art Museum). Planned for the vacant area between the Philharmonie and Neue Nationalgalerie, it should solve the galleryâs long-lasting lack of space and house the art collections newly donated.  A competition for the design of the museum has been announced in September. For reasons assumed to be timeframe and budget, the museum will be delivered by means of a public-private-partnership (PPP) model, with the brief prepared by external consultants. The city of Berlin seems to have a limited, if any, role in the conceptualisation and delivery of the project. There is also a notable lack of critical discourse around the decision to build a new museum of modern art, on this particular site, and without a larger vision for the urban future of the Kulturforum area.

A 21st CENTURY RESPONSE TO BERLIN'S KULTURFORUM: FROM A CULTURE FORUM TOWARDS A FORUM OF CULTURE(S)
Berlinâs Kulturforum contains two compelling ideas: the programmatic idea of a âCulture Forumâ born in the era of post-war Modernism, and Hans Scharounâs aforementioned urban design idea for the city as a landscape. Despite their unique and wonderful aspects, both ideas have proven to have some flaws as highlighted in the observations by the work of McGill University, Royal Melbourne Institute of Technology and the University of Kentucky. With the focus on inclusion and exclusion in the public realm, we invite the participating Universities in Residence to consider evolving the ideas of Kulturforum from a âCulture Forumâ towards a âForum of culture(s)â. Phase 3 will explore how this can be delivered by the next era urban design, where complex and dynamic responses support the traditional focus on form and figure-ground, in making successful urban situations.