Berlin - Oberschöneweide is located at the northern border of the river Spree and belongs to the borough of Treptow-Köpenick. In the past, the area went through vital functional and atmospheric transformations. Starting as a contemplative leisure place with several getaway restaurants it became one of the most important industrial areas in Germany at the turn of the last century. Most of the settling companies belonged to the electric industry, such as AEG. Therefore a unique ensemble of multi-storey factories, production halls and administrative buildings was built here between 1890 and 1920. 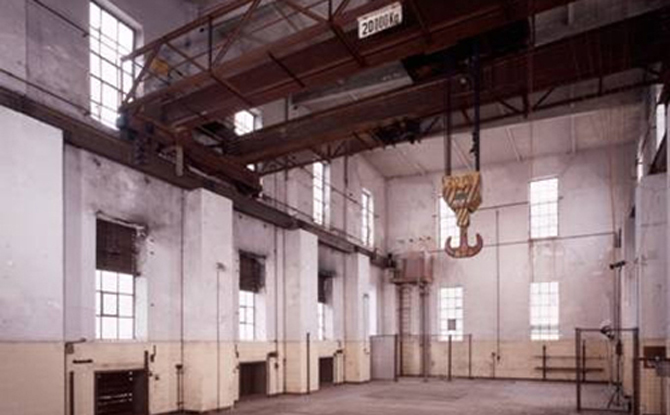 Today the area is again in a remarkable transformation process. New programmes like the “Hochschule für Technik und Wirtschaft HTW Berlin” (University of Applied Sciences) settled here in buildings listed as monuments. One of the most fascinating building ensembles on this site will be subject of this workshop: The electric power transformation substation Oberspree. It consists of three parts: the “Transformatorenhaus” and “Schalthaus” by the architect Hans Heinrich Müller (head of the building department of Bewag) and the “Phasenschieberhalle”.

During the workshop, we will develop a menu of diverse and appealing programmes and innovative spatial concepts. What kind of programmatic ideas could be stimulated by the proximity of HTW activities with their wide variety of study courses such as game design, mechanical engineering, fashion design, etc.? Can the German - Polish collaboration of this workshop inspire a future-oriented use? What could encourage this meaningful historical site to become an active island in the city of Berlin? Who are the clients for future uses? Where do they come from? Considering the former use as electric power transformation substation, which kind of cutting-edge energy-efficient programmes could be invented?

Based on the new programmatic requirements for the site, the participants will develop innovative spatial concepts and sensitive atmospheric ideas.

The Project started when we first visited the place. Our first impression was of an old and rusted industrial building.  We decided to change it by creating a “post-transformer” space with old and rusty industrial elements that were left behind. Our creation was charming, but Berlin citizens still connect this area with the power plant and the industrial area of East Berlin.

We decided to change this vision of the place. We aimed at giving the new space a new green image, creating a building that is self-sufficient and completely disconnected from the electrical network of the city. In this new building, the function will change, it will house a new centre for the research of renewable energy. Following this line of self-sufficiency and "green-thinking", the whole complex will be powered by a liquid hydrogen reactor placed in the Phasenschieberhalle. The by-product of this is water which will be used to create two pools.

But for us changing the consciousness of society is not enough. We want to bring people to the building, show them that in East Berlin someone is making a difference. That is why in addition to the creation of the pools, we define the research spaces as open spaces for the public, so that the visitors can experience by themselves what has to be changed. "This is how the Green Wave came to life".

When we first visited the old transformation station we found three very different buildings. One big hall with a crane in it, one building with a beautiful curved wall and a third building divided in  a set of several different spaces and rooms. All of us were aware that these great spaces needed to be reorganized without losing their open and airy character and be filled with life again.

With a part of the University of Applied Sciences of Berlin being nearby, it was obvious to us that one building should be reused as a student residence hall with different types of apartments. After the program was established for the first building, we quickly developed ideas for the program of the other buildings. The great hall with the crane would become a club and the building with the curved wall would be transformed into an art café, with a set of ateliers that could be rented by students from the nearby university.

Because we wanted to show a relationship between the three buildings, we decided to create a flexible module that could easily be placed at different points and used in different contexts for the use of space and organization. We decided that our module should have the shape of a cube. The cube module is an element that can be opened, split and illuminated. It can even work as a transition between interior and exterior. The different uses that we allocated to these cubes were points of light, bathrooms, entrances to homes, food areas, modules and yard working areas.

Project Without a Title

“To re-use and re-think an area, that has been abandoned for a long time, where there was no public use, and whose standing needs to be reminded to the locals”. With this task in mind, we decided to approach the project as a possible four phases development.

In the first phase, we would work on the ground-floor of one of the buildings, creating a bar and an art-house cinema that would work as meeting point for young people (harnessing the potential of the nearby University of Applied Sciences and Berlin’s reputation as a nightlife city). This first step could be implemented without significant changes to the pre-existing building.

In the second phase, we should focus on opening the area to the urban surroundings, seeking to create a market area between the three buildings. This market would be created from a set of modules in order to reuse the pre-existing structure.

In the third phase we would inhabit the building, we give people the opportunity to live or work in the residential area to the west. Once we have concluded the three phases, we can say that the area is revitalized and therefore we can start focusing on the last phase, “arts and crafts”.

In this phase, we allocate an exhibition area on the upper floor of the main building where the works of arts are displayed and sold. This stands in contrast with the 'Phasenschieberhalle' in the south of the area and at the court where the art is created. In this forth phase we would also create a café that will work as a meeting point for artists and costumers. This would be the end point when the costumers meet the artist after seeing the process and the exhibition of the works of art.

Our concept was to create a friendly environment for young promising artists to live, design and present their works to others. We decided to offer to the fashion design graduates of the nearby university a place to develop their work. We also tried to encourage interactions between them and the community.

The Design Incubator is all about the different aspects of the space and connections in terms of urban context, the site itself and the buildings interiors. A welcoming public space, created by the demolition of a frontal building, is partially embraced by the bow–shaped part of the “Schalthaus”. By conceiving the roof as a passage between existing buildings, we created an intimate space. This intimate space integrates restaurants and cafes on one side and artists’ showrooms and boutiques on the other. The arcade itself is guiding  newcomers to the“Phasenschieberhalle”, which is now used for entertainment purposes, such as a club, fashion shows or festivals.

The showrooms are directly connected by ramps with the designers’ working and exhibition spaces, located on two floors of the “Transformatorenhaus”. Those interior spaces could be used for both individual and group work. This double use was made possible through the use of removable, semi-translucent fabrics that help to arrange the space in a flexible way.

By partly removing an existing construction in the “Schalthaus”, we gained a completely rearranged space, linked by two floating boxes of working spaces. The inspiring play of lights and materials was also used in the concept of vertical tunnels of light brought from the roof, fringed with pieces of fabric. The last floors of the “Schalthaus” and the “Transformatorenhaus” are dedicated for artists’ living spaces.

The Design Incubator is intended to become a vivid place, hosting diverse functions provided in various spaces, conducive to creativity.

Our main idea was to create a meeting place for young people, where they can spend some nice time, study and enjoy art. The leisure, education and art center or in short words: LEA was born. Some temporary flats and working rooms for actors will complete the program.

The Phasenschieberhalle with its wide, open and high space can be used as a cinema, theatre or just as a presentation room. It is a multifunctional place, where actors can present their shows. The old and rusted flair of this place will be taken into consideration. That is why the old hook will be kept. A movable platform will create a second level, where the audience can sit.

A two floor library focusing on books, magazines and movies for actors and a café with a terrace towards the street are going to move into the biggest building. The opening to the street will indicate that something is happening here and it will catch people’s attention. Additionally students can rent a temporary flat with an atelier inside. The special atmosphere will be kept as far as possible.

The last building will have a gallery on the first floor and working rooms above.