As of 2011 the relationship between public spaces and private interests in the public realm is under fierce debate on many levels of society and in many German cities. Especially in Berlin the contested spaces are numerous, the most symbolic being the incomplete Mauerpark-projekt on the former frontline of the cold-war era. 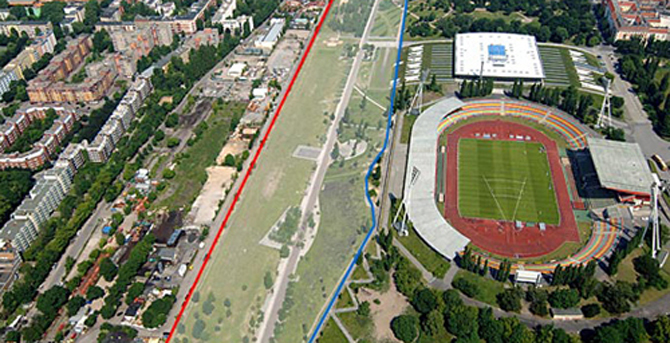 More than 20 years after reunification the eastern half – on the former death-strip – with its landscape-architecture of 1994 – is a huge success as an open space for representation and informal event-space resulting in a distressed park, but a unique harmony of differences. The western half, still a brown-field populated each Sunday by Berlin’s hippest flea-market, is a highly contested space, where traditional planning methods and design-solution failed to deliver solutions that would win approval of any interest-group.

The Studio will find a battleground of plans and imagery of the last 15 years which use a dichotomy of architecture and landscape, city and ecology to feed into the grid-lock situation found today. The challenge is to pursue an interrogation of possible futures integrating beyond the assumed dialectic of public and private spaces.