Imagine a circular band of civic domains around the inner city of Berlin. A circular campus consisting of academic institutions, housing, private companies, and parks. 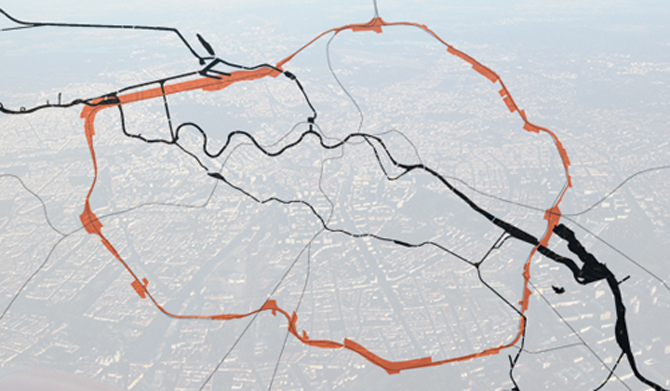 The city offers a large field of observation and theoretical reflection to become the foundations for professional strategies. The characteristic forms of the city’s determining elements, the way the population performs and the form of its urban territories (settlements, traffic systems, forests, agricultural lands, fallow lands and water) concerning their morphological principles and their rules of appearance and change are subjects of investigation when we create strategic design proposals for the future city. The control of metropolitan infrastructure, its principles and concrete manifestations through urban projects challenge the theory and the practice of the architect. Investigating the Berlin S-Bahn-Ring means being concerned with the urban space of both, the one of the city centre and the one of the city edge. In both cases innovative forms of living and working, which respond to the new socioeconomic conditions such as distributive knowledge work, globalisation, and demographic changes, can be taken to create a vision for the whole city.

If we rethink the chain of voids along the Berlin S-Bahn-Ring, can we develop new prototypical worklife models for the European City?