Book Launches
"Improvisations on Urbanity: Trendy Pragmatism in a Climate of Change" by Ton Matton and Christopher Dell
"Of People and Houses: Architecture of Styria" by Andreas Ruby, Ilka Ruby, photography by Livia Corona 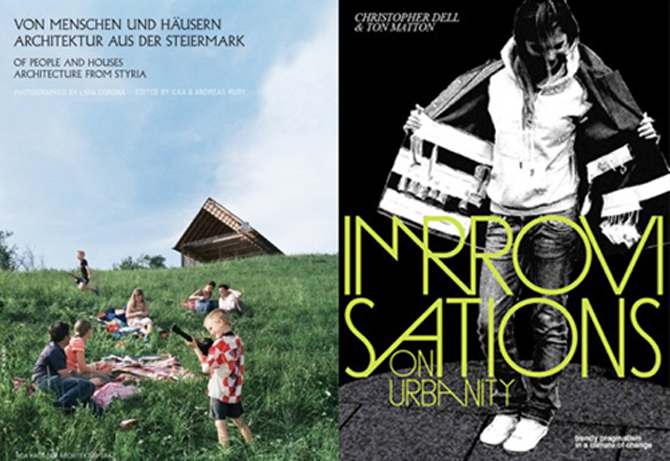 Christopher Dell and Ton Matton: Improvisations on Urbanity: Trendy Pragmatism in a Climate of Change
In a time where diverse life forms and rational principals coexist, urbanism becomes moreand more inoperative. As the urban becomes even more complex, we have to begin to reflect upon how orders are created and negotiated. This means that orders are not given, but have to be improvised. The urban is designed by a performative imperative. If the subject of industrialism was governed by corporate regulations, it now has to govern itself. But how does that work? How do we create new forms of self-governing? How do we organize and produce social space under these circumstances?
The book was published by: post-editions Rotterdam 2010.
The presentation was made possible in cooperation with the Dutch Embassy in Berlin.

Andreas and Ilka Ruby (editors) Livia Corona (photography): Of People and Places: Architecture of Styria
This 2008/2009 edition of the Haus of Architecture Graz yearbook is a departure from the traditional architectural yearbook. Editors and curators Ilka and Andreas Ruby created Of People and Houses in the spirit of a time capsule rather than an archival document. A distinctive three-part strategy of interviews, drawings and photographs was used to communicate the eleven architectural projects chosen for inclusion in the yearbook.
The book was published by: Haus der Architektur Graz 2009