LOS ANGELES VS. BERLIN
How should cities deal with their architectural past?
15 July 2009 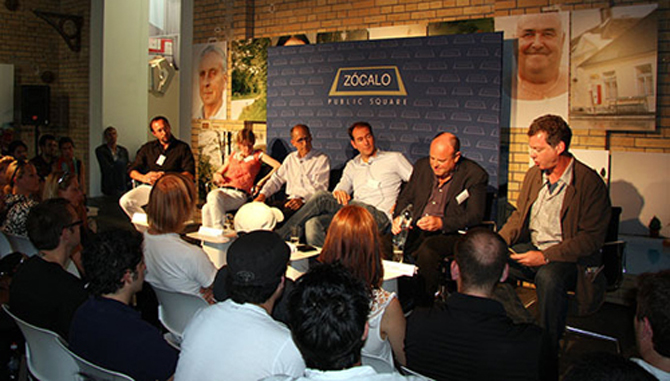 Overview
It could be said that Los Angeles has too little history and Berlin has too much. Los Angeles sits on the western edge of the New World, barely inhabited until a population boom this century. Berlin sits in the center of the Old World, the site of centuries of conflict, the most recent of which left the city divided. Both are in a state of transition. Berlin is being rebuilt while Los Angeles is sprawling: all at a time of economic crisis.

How should Berlin and Los Angeles—where residents daily encounter the vestiges of history, the ghostly sites of demolition, and the clatter of construction—build for the future? Zócalo hosts a panel of American and German historians, urbanists and architecture critics to discuss what to preserve of the past, what to pave over, and how to plan and build civic identities for two notoriously changing cities.

ZOCALO and the Huntington-USC Institute on California and the West
In an era of increasing connectedness between global cities, Zócalo’s “L.A. versus the World” series examines Los Angeles’ role relative to other great cities around the world. Discussions focus on dynamic points of connection and controversy, encouraging consideration of how we can develop thriving, liveable cities. The ‘Zocalo Public Square’ discussion forum was initiated by Gregory Rodriguez as a non-profit lecture series that "creates intellectual community across the nation by presenting smart ideas in an open, non-partisan, multi-ethnic space".

Biographies
Peter Tokofsky is head of academic programs at the J. Paul Getty Museum in Los Angeles and director of the UCLA summer German Studies program. A native of Los Angeles, Tokofsky has conducted ethnographic research in Germany that explores how contemporary society engages with the past, whether through enactment of traditional festivals or in patterns of everyday life. Tokofsky contributed to the volume "Inspecting Germany: Internationale Deutschland-Ethnographie der Gegenwart" (2002) and various other journals and exhibitions.

Roger Sherman is principal of Roger Sherman Architecture and Urban Design in Santa Monica. He is author of “Re: American Dream: Six Higher Density Housing Prototypes for Los Angeles”, and “LA Under the Influence: the Hidden Logic of Urban Property” as well as co-editing and contributing to several other publications on the nature of contemporary American cities. Sherman is also Co-Director of cityLAB, an urban design thinktank at UCLA, where he is also an Adjunct Associate Professor. He has taught and lectured widely.

Prof. Greg Hise is a historian of American cities at USC with interests in metropolitan economies, land use and property regimes, and architecture and urban planning. He is on the editorial boards of three journals and has authored and contributed to several books and articles examining topics such as regionalism, architecture as state building, and humanities education in professional schools. He is Past-President (2007-09) of the Society for American City and Regional Planning History (SACRPH) and has served on several boards and prize committees.

Wolfram Putz studied Architecture in Germany at the Technische Universität Braunschweig where he graduated as Dipl.-Ing. Arch, at the University of Utah, Salt Lake City and at the Southern Californian Institute of Architecture, USA, where he received his Master. In 1998 Wolfram Putz established GRAFT in Los Angeles together with Thomas Willemeit and Lars KruÌckeberg. GRAFT has won numerous national and international awards and garnered international fame with a widespread following throughout its 10 year existence. GRAFT today employs 100 architects and artists worldwide.

Prof. Dorothee Brantz is the director of the Center for Metropolitan Studies and Managing Director for Transatlantic Postgraduate Studies at TU Berlin. After receiving her Ph.D. from the University of Chicago in 2003, she held fellowships in Berlin, Washington, DC, and Cologne. She has published several articles on the topic of urban environmental history and is currently completing a manuscript for a book on the history of slaughterhouses in 19th-century Paris, Berlin, and Chicago.

Dr. Niklas Maak studied history of art and philosophy in Hamburg and Paris and made a doctorate on Le Corbusier. After working as a journalist for the culture section of the Spiegel and from 1997 until 2001 as editor for the feature section of SuÌddeutsche Zeitung, he is,
since 2001, Arts Editor for the Frankfurter Allgemeine Zeitung. From 2005 until 2007 Maak held a guest professorship for theory and history of architecture at the Städelschule Frankfurt. In 2009, Maak received the Kennan Prize.

We would like to thank The John Randolph Haynes and Dora Haynes Foundation of Los Angeles and The Alfred Herrhausen Society for their generous support.