FUTURE OF LIVING - URBAN AGRICULTURE - CULTURAL MEMORY: How to learn, act and innovate together across cultures and continents?
Thursday, 26 April 2018

Join an evening with Citymakers China-Germany! 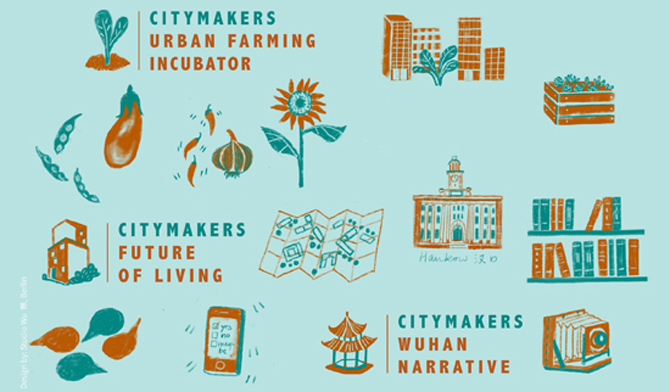 Date: Thursday, 26 April 2018, 6.30 pm
â¨Prior to the event, at 6:00 pm we invite you to a guided tour by curator Eduard Kögel through the exhibition Rural Moves - The Songyang Story at Aedes Architecture Forum
Location: ANCB The Aedes Metropolitan Laboratory, Christinenstr. 18-19, 10119 Berlin

CITYMAKERS China-Germany is a program initiated by Robert Bosch Stiftung and the Shanghai and Berlin based agency CONSTELLATIONS International in 2016. The mission: To tap the potential of global learning by building a Sino-German network of city makers who are pioneering for novel models for livable cities. The ambition: Moving from dialogue to action: For six months (from September 2016 till February 2018), three teams from Beijing, Wuhan, Shanghai and Berlin consisting of academics and practitioners alike worked on three themes: "The Future of Living", "Cultural Memory: Wuhan Narrative" and "Urban Agriculture".

The questions of inquiry: â¨
How could a novel resident-centered building-type in China based on a collective space look like? How could innovative German co-housing models inspire architectural practice in China? â¨What is the relevance of cultural heritage for a city’s identity? Concretely, with the example of Wuhan, the city where in 1895 the first German Concession in China was established: What are the “cultural narratives” that are still embedded in the built environment? How could a productive Sino-German debate on culture and identity in urban space contribute today? â¨How can scalable solutions for urban farming look like and how can knowledge exchange between China and Germany contribute?

ANCB was pleased to host the final event of this inquiry process in search for city innovations between China and Germany and discuss the results with the ANCB network of partners, clients and friends.