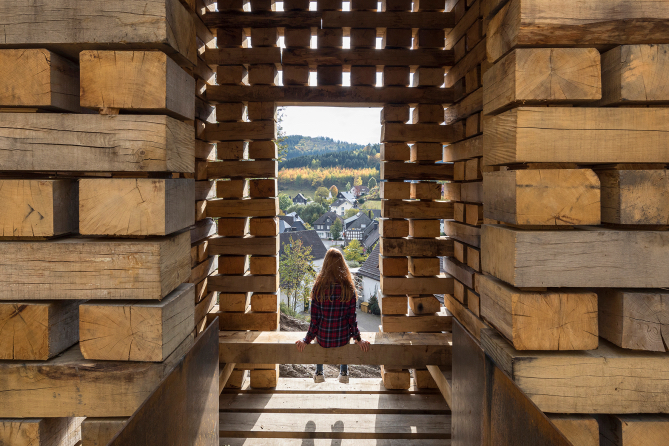 The speakers will present examples from their work and research on rural revitalisation and holistic strategies for landscapes and small towns in China, Germany and the United States.

These public lectures will kick off Yale University's Design Studio at ANCB, led by Xu Tiantian and Tei Carpenter in collaboration with Christoph Hesse. Students from a range of disciplines will explore heritage and identity as well as engage social and architectural interventions to reinvent the village of Referinghausen in Hessen, where the community will act as the client of the studio. At the same time, they will critically examine and propose rural and urban connectivity strategies between the village community and its relationship as a potential cultural satellite to the city of Kassel.

Q&A
with the audience

Followed by a reception in the Aedes exhibition local & transcultural by PLAYZE architects | Berlin, Basel, Shanghai

This event is part of the ANCB theme Regions on the Rise exploring strategies and creating new visions for the development of rural regions of the future.

Xu Tiantian is the founding principal of DnA _Design and Architecture. She has received numerous awards such as the Moira Gemmill Prize for Emerging Architect in 2019, and the 14th International Prize for Sustainable Architecture Gold Medal. In 2020, she was appointed an Honorary Fellow of the American Institute of Architects. Xu Tiantian has engaged extensively in the rural revitalising process in China. Her groundbreaking Architectural Acupuncture is a holistic approach to the social and economic revitalisation of rural China and has been selected by UN Habitat as a case study of Inspiring Practices on Urban-Rural Linkages. Xu Tiantian received her Master of Architecture in Urban Design (MAUD) from Harvard Graduate School of Design and her Baccalaureate in Architecture from Tsinghua University in Beijing.

Tei Carpenter is founder and director of Agency—Agency, a New York City based architectural design practice. Trained in philosophy and architecture, she specialises in cultural, residential and public installation projects. Tei Carpenter / Agency—Agency has been honoured as a winner of the League Prize by the Architectural League of New York, the 2018 New Practices New York by the American Institute of Architects and included in Domus Magazine’s 2019 list of the Best 100 Architecture Firms. The studio’s work has been has been exhibited internationally at venues including the Storefront for Art and Architecture, the Venice Biennale and the Oslo Triennale. Tei has taught design studios at Brown University, Columbia GSAPP, the University of Toronto, and Rice University where she was the Wortham Visiting Lecturer. Currently, she is a Critic at the Yale School of Architecture.

Theme
Regions on the Rise